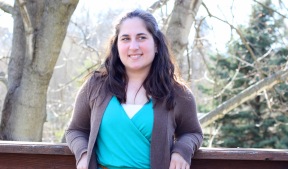 Suzanne Michele is a 30 (something) year old mama, born in Central, Pennsylvania. Suzanne works with children with Autism and special needs as a Licensed Behavioral Specialist. She never planned on working in this specialty, but life directed her in that path and she found a new passion. She started blogging during her last week of pregnancy in 2011, when the constant suggestions of how to induce labor became overwhelming (and quite frankly, annoying) at almost 41 weeks of pregnancy.

While Suzanne’s blog first started as a place to provide updates on her pregnancy and life as a new mom, it quickly transformed into a therapeutic outlet after her son was born with a Congenital Heart Defect and later ended up with a feeding tube. While her son’s medical issues have resolved for the most part, she continues to be inspired by her son, the general ups and downs of parenting, and doing what she feels is best for her family.

Suzanne is married to her high school sweetheart, affectionately referred to as “Hubs” on the blog. Suzanne and Hubs met while working in an old fashioned pharmacy (soda fountain and all!). Suzanne was a senior in high school, while Hubs was a junior. Somehow, they managed to make their relationship work despite Suzanne’s venture to college and Hub’s venture to enlist in the United States Marine Corp. A long distance relationship couldn’t tear these two apart; it only made them fight harder for their relationship. They were married June 19, 2004. Suzanne moved to Hawaii, where Hubs was stationed, and managed to complete her Master of Arts degree in Clinical Psychology. Hubs discharged from the Marines in 2006 and pursued a Bachelor’s degree in Administration of Justice. He spent several years working in an adolescent group home, but then decided to pursue a less stressful career for the local transit authority. Suzanne and Hubs have a beautiful son together, who is referred to as M throughout the blog. M was born on Saturday, January 7, 2012 at 2:44pm.

Suzanne enjoys writing about her son, family life, going green, and DIY projects (and a smattering of reviews and giveaways). You’ll find posts about parenting, general family life, experience using cloth diapers, and her attempts at becoming crafty. Suzanne is just your regular mom that strives to tackle the balance of work and motherhood.